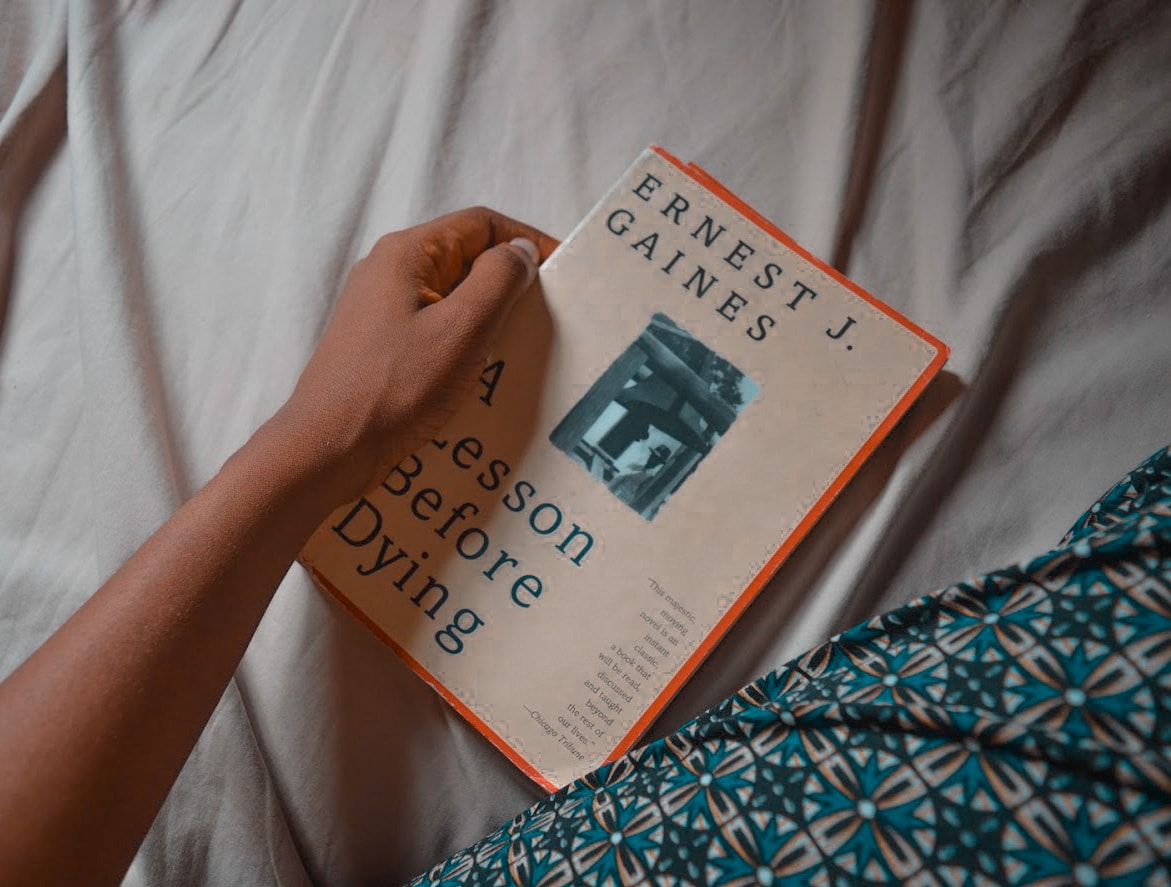 A lesson before dying is a powerful and moving book. It was partly based on a true life story of Willie Francis, a young black man sentenced to death by the electric chair twice in Louisiana, in 1945 and 1947. He is best known for surviving a failed execution by electrocution in the United States.

This book was published when I just turned 2 years old and it is quite sad that decades later, it is still so relevant. This is definitely one of my best purchases this year. Prior to buying this book, I’d never heard of the author which is quite sad because i read that he died last year but I’m always excited to discover new authors – whether dead or alive.

The world is in shambles right now and we black people have had enough. The pain, injustice and suffering is overwhelming. I am honestly exhausted.

A lesson before dying is set in a small Cajun community in Louisiana in the late 1940s where a young black man, Jefferson was arrested because he was in the wrong place at the wrong time. Two men in the bid to rob a liquor store, ended up killing the store owner and dying in the process. Meanwhile, Jefferson happened to be the only surviving witness. He was convicted of murder and sentenced to death via the electric chair by an all-white jury. His defense attorney likened him to a hog who isn’t even smart enough to know what is going on much less commit a murder.

His Godmother decided to ask the local teacher, Mr Grant Wiggins – a black man to teach him how to be a man, how to stand up tall and die with dignity and not a hog. In this book, we see that even the teacher whose life seem to be a bit better is fighting his battle from the years and years of trauma and oppression inflicted on black people and this is apparent in how flawed he is.

“Do I know what a man is ? Do I know how a man is supposed to die ? I’m still trying to find out how a man should live. Am I supposed to tell someone how to die who has never lived ?”

There were parts in the book where he had to purposely dumb himself down in front of the white folks so as not to appear proud. “I tried to decide just how I should respond to them. Whether I should act like the teacher that I was, or like the nigger that I was supposed to be.”

Grant reluctantly had to visit Jefferson in jail and we see how the relationship between these two men evolved and it was beautiful to read. ‘And that’s all we are Jefferson, all of us on this earth, a piece of drifting wood. until we – each of us, individually- decide to become something else. I am still that piece of drifting wood, and those out there are no better. But you can be better. ”

It ended in a powerful yet profoundly sad manner. I am so glad Ernest Gaines wrote this book, May his soul rest in peace. He was a fantastic writer. I read this book in 24 hours because I simply couldn’t drop it.

This book won the National Book Critics Circle Award for Fiction in 1993 and the movie adaptation won the Primetime Emmy Award for Outstanding Television Movie in 1999.

This quote had me screaming YASSSSSS

‘Do you know what a myth is, Jefferson? A myth is an old lie people believe in. White people believe that they’re better than anyone else on earth- and that’s a myth. The last thing they ever want is to see a black man stand, and think, and show that common humanity that is us all. It would destroy that myth. They would no longer give justification for having made us slaves and keeping us in the condition we are in. As long as none of us stand, they’re safe.‘

Black men are convicted wrongly, treated worse than animals and killed everyday just because of the color of their skin. It is heart-breaking that not much has changed and this is why we are screaming and letting the world know BLACK LIVES MATTER. WE HAVE NOT MATTERED, WE HAVE NOT BEEN TREATED FAIRLY ALL OUR LIVES. THE INJUSTICE KEEPS GOING FROM GENERATION TO GENERATION. IT IS BLOODY EXHAUSTING.

Don’t stop fighting for your rights, Don’t stop speaking up about the injustice, Let your voices be heard. Use your platforms, donate and make a difference in your own little way. I initially felt like i was torturing myself by reading this book mainly because a whole lot is happening right now and being triggered wasn’t on my agenda but I am so glad I read it. I needed to read it.

I’m Nigerian and I grew up in Nigeria. It’s easy to sit ignorantly and say this doesn’t concern me. I didn’t learn about my own country’s history in school much less that of America. It’s so easy to say ‘How does this concern me?’ I’m here to break it to you that whether you’re African or from the Caribbean or anywhere else, this is very much your fight. You are Nigerian but you have to google How safe a country is as a black tourist and you think this isn’t your fight? We can no longer afford to stay ignorant because there are numerous resources out there. Educate yourself. Do the work.

Okay, I should probably stop now or this won’t end. Read books, read this book! That’s it.