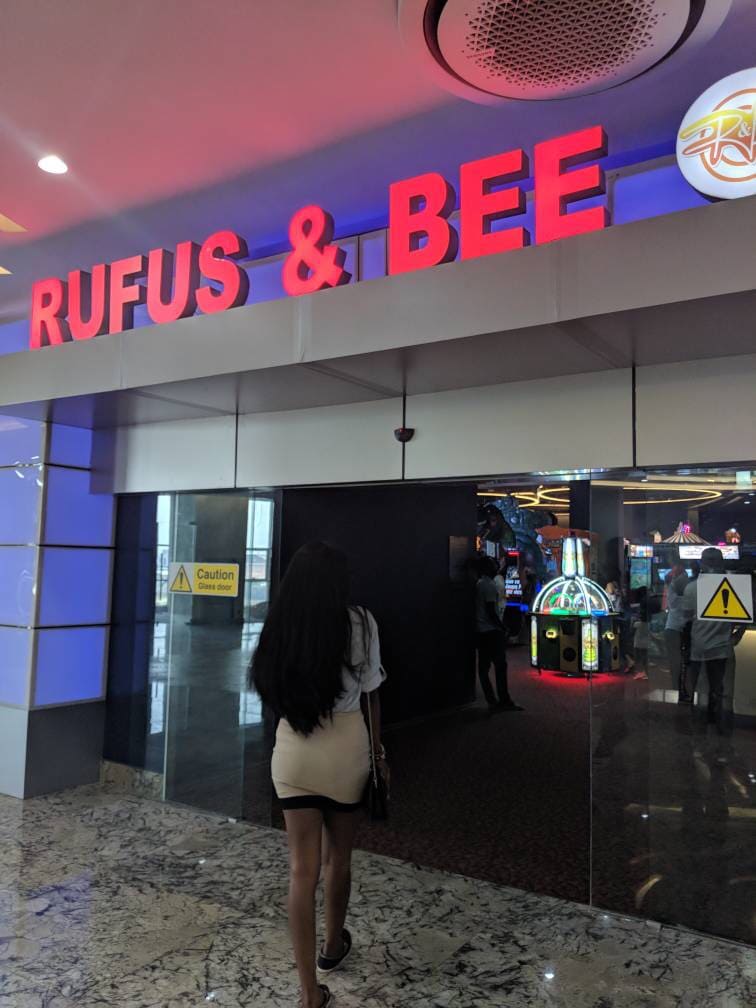 So we went to Rufus & Bee and it was kind of awesome.

Kelvin hit me up couple of days before Titi’s birthday to tell me about the plan to go to Rufus & Bee to celebrate her birthday the weekend before her birthday. From what he told me, I budgeted 10,000 naira for games, food and drinks.

We planned to go there 4pm and we arrived a little later. Personally, I was looking forward to the whole thing because I haven’t been out properly in Lagos this year especially after returning from Sokoto. We came up with our outfits about 10minutes before we left.

We were going for something comfortable yet stylish.

We took some pictures before we entered the building.

Immediately we entered, we saw the board showing the different amounts per chips available.

We had to buy two buzzzcards – one for my Tolu and i and the other for Titi & Kelvin. Each buzzzcard costs N1,050. We charged up our cards and we were ready! While we waited for everyone to arrive, we decided to go to the restaurant to get some food.

The prices were not as affordable as i imagined but weren’t ridiculously expensive either. Or maybe my eyes sorta went towards the meals I could afford. Cheapest meal was 4,500 if i remember correctly.

A waiter came and disappeared before we even told him our order. They were all over the place but somehow they did not get to our table. It was almost like they were forming activity which was quite ridiculous. Titi’s friends arrived and  we were still looking for a bloody waiter. We spoke to someone that was in charge and a guy came to take our orders. He started and mid way through taking our orders, he said he had to go somewhere and he’ll be back. We waited another 10-15minutes. It was actually now ridiculous. At this point, I was over it. A waiter finally appeared and took our orders. Thankfully, the food was ready in less than 10 minutes and the ocean view was AMAZING!

One small thing i did not understand was the fact that coke/fanta/sprite was N600. WHAT? LMAO

Anyway, we eventually finished eating and with so much excitement walked to the games section. They have A LOT of games. I legit got confused at some point.

Once we started playing, it was hard to stop. We eventually left around 9 pm.

It was a really fun and chilled day. I had a blast and i kept my buzzcard because i’ll most likely be going there again.

If you’re looking for a spot to hangout with your friends and family (it’s a kid friendly place), then I’d recommend Rufus & Bee and budget at least N10,000 per head if you’re planning to eat or drink and N5,000 if you’re going for the games.

Have you been to Rufus & Bee? Did you enjoy it?

Also, If you know any other cool spot to hang out (In Lagos), let us know in the comments section.