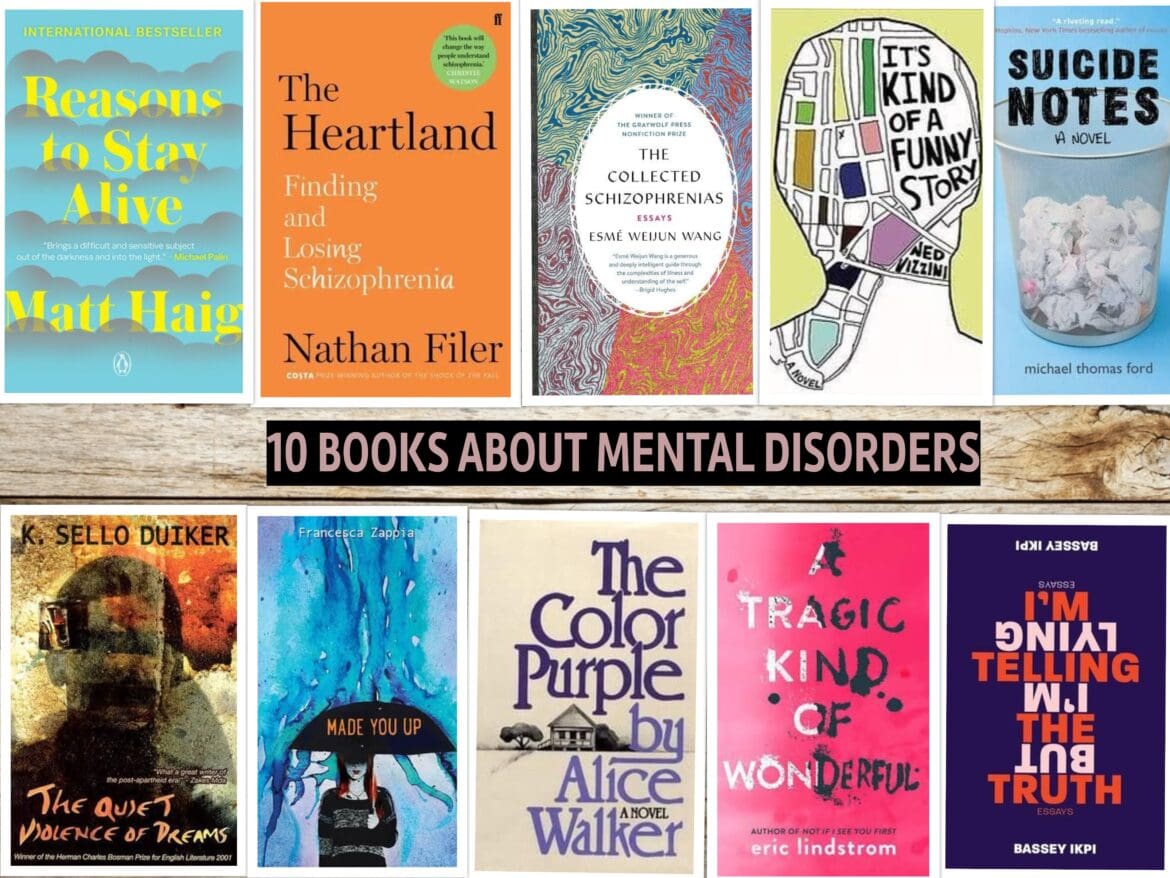 It’s May which means it’s mental health awareness month. Yass! I get very excited about these things. What better way to create awareness if not with books. In this post, i’ll be listing 10 books about Mental disorders.

I know we’ve come a long way with mental health awareness in Nigeria and Africa as a whole which is fantastic. However, I feel like the focus is usually on Depression and Anxiety. Don’t get me wrong, it’s great because we’re making progress but there are still so many other disorders we should know about.

I sometimes remember my Psychiatry rotation in Medical School. It’s been one of my fondest memories from Med School. I got to spend so much time with the patients and actually got to talk to them about their lives. Their stories, the joy on their faces when they feel you’re not scared of them. I cried, laughed, celebrated with them. I got to see cases like cannabis induced psychosis, Bipolar disorder, Schizophrenia, Schizoaffective disorders, PTSD, Major depressive disorder and so much more. I really don’t think we have an excuse to be ignorant about mental disorders in 2020.

Okay. Back to why i’m here. Let’s get right to it. Shall we?

‘Fifteen-year-old Jeff wakes up on New Year’s Day to find himself in the hospital. Make that the psychiatric ward. With the nutjobs. Clearly, this is all a huge mistake. Forget about the bandages on his wrists and the notes on his chart. Forget about his problems with his best friend, Allie, and her boyfriend, Burke. Jeff’s perfectly fine, perfectly normal, not like the other kids in the hospital with him. Now they’ve got problems. But a funny thing happens as his forty-five-day sentence drags on: the crazies start to seem less crazy. Compelling, witty, and refreshingly real, Suicide Notes is a darkly humorous novel from award-winning author Michael Thomas Ford that examines that fuzzy line between “normal” and the rest of us.‘

For sixteen-year-old Mel Hannigan, bipolar disorder makes life unpredictable. Her latest struggle is balancing her growing feelings in a new relationship with her instinct to keep everyone at arm’s length. And when a former friend confronts Mel with the truth about the way their relationship ended, deeply buried secrets threaten to come out and upend her shaky equilibrium. As the walls of Mel’s compartmentalized world crumble, she fears the worst—that her friends will abandon her if they learn the truth about what she’s been hiding. Can Mel bring herself to risk everything to find out?

Ambitious New York City teenager Craig Gilner is determined to succeed at life – which means getting into the right high school to get into the right job. But once Craig aces his way into Manhattan’s Executive Pre-Professional High School, the pressure becomes unbearable. He stops eating and sleeping until, one night, he nearly kills himself. Craig’s suicidal episode gets him checked into a mental hospital, where his new neighbors include a transsexual sex addict, a girl who has scarred her own face with scissors, and the self-elected President Armelio. There, Craig is finally able to confront the sources of his anxiety. Ned Vizzini, who himself spent time in a psychiatric hospital, has created a remarkably moving tale about the sometimes unexpected road to happiness.

4. The heartland: Finding and losing Schizophrenia by Nathan Filer

This book has been republished with the title, This Book Will Change Your Mind About Mental Health: A journey into the heartland of psychiatry. Schizophrenia: whether it’s the associations it conjures or the people it brings to mind, it is a word we all have a view on. How we perceive it—and how we treat people living with it—is at the core of how we understand mental health. But what do we really know? How much time do we spend listening? Do we truly comprehend this complex and often contradictory diagnosis?

In The Heartland , Nathan Filer, mental-health nurse and award-winning writer, takes us on a journey into the psychiatric wards he once worked on. He also invites us to spend time with world-leading experts, and with some extraordinary people who share their stories about living with this strange and misunderstood condition.

An intimate, moving book written with the immediacy and directness of one who still struggles with the effects of mental and chronic illness, The Collected Schizophrenias cuts right to the core. Schizophrenia is not a single unifying diagnosis, and Esmé Weijun Wang writes not just to her fellow members of the “collected schizophrenias” but to those who wish to understand it as well. Opening with the journey toward her diagnosis of schizoaffective disorder, Wang discusses the medical community’s own disagreement about labels and procedures for diagnosing those with mental illness, and then follows an arc that examines the manifestations of schizophrenia in her life.

In essays that range from using fashion to present as high-functioning to the depths of a rare form of psychosis, and from the failures of the higher education system and the dangers of institutionalization to the complexity of compounding factors such as PTSD and Lyme disease, Wang’s analytical eye, honed as a former lab researcher at Stanford, allows her to balance research with personal narrative. An essay collection of undeniable power, The Collected Schizophrenias dispels misconceptions and provides insight into a condition long misunderstood.

Like nearly one in five people, Matt Haig suffers from depression. Reasons to Stay Alive is Matt’s inspiring account of how, minute by minute and day by day, he overcame the disease with the help of reading, writing, and the love of his parents and his girlfriend (and now-wife), Andrea. And eventually, he learned to appreciate life all the more for it.

Above all, his humor and encouragement never let us lose sight of hope. Speaking as his present self to his former self in the depths of depression, He is adamant that the oldest cliché is the truest—there is light at the end of the tunnel. He teaches us to celebrate the small joys and moments of peace that life brings, and reminds us that there are always reasons to stay alive.

I reviewed one of his books two years ago. You can read it here

A powerful cultural touchstone of modern American literature, The Color Purple depicts the lives of African American women in early twentieth-century rural Georgia. Separated as girls, sisters Celie and Nettie sustain their loyalty to and hope in each other across time, distance and silence. Through a series of letters spanning twenty years, first from Celie to God, then the sisters to each other despite the unknown, the novel draws readers into its rich and memorable portrayals of Celie, Nettie, Shug Avery and Sofia and their experience. The Color Purple broke the silence around domestic and sexual abuse, narrating the lives of women through their pain and struggle, companionship and growth, resilience and bravery.

I just bought the book as I was compiling this list and I cannot wait to read it.

A deeply personal collection of essays exploring Nigerian-American author Bassey Ikpi’s experiences navigating Bipolar II and anxiety throughout the course of her life. Bassey Ikpi was born in Nigeria in 1976. Four years later, she and her mother joined her father in Stillwater, Oklahoma —a move that would be anxiety ridden for any child, but especially for Bassey. Her early years in America would come to be defined by tension: an assimilation further complicated by bipolar II and anxiety that would go undiagnosed for decades.

By the time she was in her early twenties, Bassey was a spoken word artist and traveling with HBO’s Russell Simmons Def Poetry Jam, channeling her experiences into art. But something wasn’t right. Beneath the façade of the confident performer, Bassey’s mental health was in a precipitous decline, culminating in a breakdown that resulted in hospitalization and a diagnosis of Bipolar II. Determined to learn from her experiences, and share them with others—Bassey became a mental health advocate and has spent the fourteen years since her diagnosis examining the ways mental health is inextricably intertwined with every facet of ourselves and our lives. Viscerally raw and honest, the result is an exploration of the stories we tell ourselves to make sense of who we are—and the ways, as honest as we try to be, each of these stories can also be a lie.

9. The quiet violence of dreams by K. Sello Duiker

The Quiet Violence of Dreams is set in Cape Town’s cosmopolitan neighbourhoods – Observatory, Mowbray and Sea Point; where subcultures thrive and alternative lifestyles are tolerated. The plot revolves around Tshepo, a student at Rhodes, who gets confined to a Cape Town mental institution after an episode of ‘cannabis-induced psychosis’. He escapes but is returned to the hospital and completes his rehabilitation, earns his release – and promptly terminates his studies. He now works as a waiter and shares an apartment with a newly released prisoner.

The relationship with his flatmate deteriorates and Tshepo loses his job at the Waterfront. Desperate for an income, he finds work at a male massage parlour, using the pseudonym Angelo. The novel explores Tshepo-Angelo’s coming to consciousness of his sexuality, sexual orientation, and place in the world. Lifestyle and set of experiences are explored – that of a young black woman who gets involved with a disabled German student who does not want to commit to marriage, despite Mmabatho’s unplanned pregnancy.

10. Made you up by Francesca Zappia

Alex fights a daily battle to figure out the difference between reality and delusion. Armed with a take-no-prisoners attitude, her camera, a Magic 8-Ball, and her only ally (her little sister), Alex wages a war against her schizophrenia, determined to stay sane long enough to get into college. She’s pretty optimistic about her chances until classes begin, and she runs into Miles. Didn’t she imagine him? Before she knows it, Alex is making friends, going to parties, falling in love, and experiencing all the usual rites of passage for teenagers. But Alex is used to being crazy. She’s not prepared for normal. Funny, provoking, and ultimately moving, this debut novel featuring the quintessential unreliable narrator will have readers turning the pages and trying to figure out what is real and what is made up

So there you have it. 10 books about mental disorders. I haven’t read all the books on this list but I definitely think they’re worth checking out.