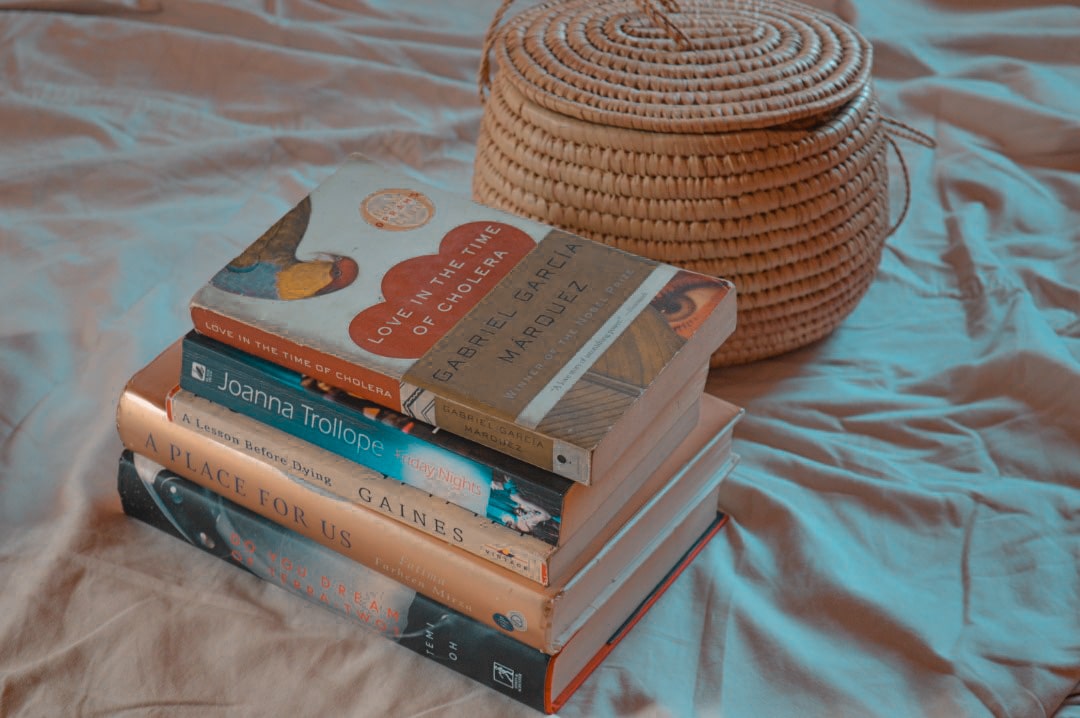 Hey book lovers! How are you holding up? May started off super great bookwise and I thought I could keep up the momentum but alas, I gloriously fell into a reading slump. I still somehow read 8 books in May. So I guess that’s not too shabby.

I’m trying to read more paperbacks/hardcovers this year and so far it’s been going great. Every month, I make sure I read at least one paperback.

Before I tell y’all about the books I read in May, I think you should take some time to read our last post where we shared some interesting links. Okay? Done? Alright, now we can get into the book list.

This was a light read. I listened to the audiobook on scribd and it was so fun and needed because I had just read a very heavy book and just needed to breathe. It is exactly how the cover depicts it. It centers around the lives of two women, Gray Howard whose husband just left her and mother just died of cancer and Diana Harrington whose life is in shambles. Their paths crossed and they had the sweetest friendship. It explores friendship, love and loss. It is a feel good book however it could’ve been shorter.

2. These ghosts are family – Maisy Card

These ghosts are family reminded me a bit of Homegoing with the multigenerational story line. I already spoke about it on my instagram page.
This one starts off in 2005 with the patriarch, Abel Paisley (who is now known as Stanford Solomon) attempting to reveal a secret he’s kept for about 30 years. He took on the identity of his colleague who died and fled Jamaica abandoning his wife and two children to assume he was dead.

This book has A LOT of characters and it is definitely a very ambitious debut. It’s one of those books that has a lot going on but somehow works.

Maisy Card is a beautiful story teller but I’ll be lying if I didn’t say I enjoyed it more because of the narrator,Karl O’Brian Williams who is Jamaican btw. He was amazing with the different characters ! Whoosh he nailed it down to the patois! The audiobook is available on scribd.

This is an amazing book. If you’ve read Dark Matter, you already know Blake is not alright and he has the most insane plot. The book revolves around the life of a New York city cop, Barry who discovers a strange illness – False Memory Syndrome-a mysterious affliction that drives its victims mad with memories of a life they never lived. The whole concept was crazy good. Imagine being able to go back in time and relive your life. I wasn’t remotely shocked by how this book ended knowing Blake Crouch. He just has a way of transporting us to the fictional world he creates and messing us up.

This book was so powerful and heart wrenching. Most people have read it but for those who haven’t, it’s a deeply moving story about Cora who is a slave on a cotton plantation in Georgia. A young man Caeser (who is probably my favorite character) approached her and convinced her to run away with him. She agreed and the story takes us through her journey to ‘freedom’ and obstacles she faced.

I don’t want to say too much but It’s a book I won’t forget anytime soon. Even though this was fiction, it made me very ANGRY. It reminded me a bit of ‘The Book Of Negroes’.
I highly recommend this

It was a fun read. I’m not sure why it took me days to finish. I got bored a bit at first but as I progressed, it got harder to put down! . It centers around the life of Professor Don Tillman who is the biggest nerd ever. Imagine Sheldon from the Big Bang Theory but 10 times worse. He struggles with relationships until he decided to start a project that involves him finding a wife. It is hilarious and cute! Did not know it was the first book in a series till I finished it. Will definitely be reading the book 2 because I was so pleased with how it ended

I enjoyed this. Way more than I thought I would. I like when I finish a book and I find myself thinking about the characters and wondering what eventually happens to them. I wish this was a novel and not a collection of short stories. This book has 10 interconnected stories about Nigerians living in Belgium with the focus on a particular couple Prosperous & Agu who moved to Belgium from Jos, Nigeria after their store was burnt down during a riot. It is a small book but it has heavy themes like domestic violence, struggles of being a woman, gender bias, immigration e.t.c

This was the book of the Month for my bookclub last month. You can catch up on the discussion by searching the hashtag #bnsbookclub on twitter. It was soo good. I don’t think I was quite ready for the twists and turns in this book. Each chapter ended with a revelation. It was fast paced and precise. Loved it. It centers around the life of a man who was told his wife and daughter were murdered although he didn’t believe. He quit his job and spent his time searching for the truth. It was so hard to put this down. I read it everywhere. You can definitely finish this in one sitting. Highly recommended if you like mystery/thriller novels.

8. A place for us – Fatima Farheen Mirza

I bought this book because it tells the story of an immigrant family. I love stories about immigrants. Another reason I bought it was the cover. So gorgeous. I got into it and wow. It’s such a stunning debut novel by Fatima. It’s not a story I relate to but I really enjoyed it nonetheless. That’s what makes a good story IMO. A story that pulls at your heartstrings. A story that makes you realize the power of effective parenting and the effects of favoritism and sibling rivalry in a family.

One thing I didn’t like though was how I was tossed around by the order of the chapters. The transitions were so poor, it annoyed me tbh. The themes here were faith, tradition, religion, family, love and loss.

If you like books about immigration and being raised by strict Muslim parents, then I recommend this book.

There you have it! The 8 books I read in May. I don’t know if you guys noticed but bookish posts are my favorite to write. I’m usually so excited to share. LOL

Did you read any books last month? If yes, please share!